Texture Editing How To

Texture Editing How To

OK. First you need the Blade Tools kit. There is no complicated installation procedure with these. Just copy them to a convienient place on your HD. I have them in a folder 'Blade' in my documents.
Inside the Blade Tools folder there is a Compilers folder. Inside this
is a folder 'Textures Compiler'. There are lots of files inside. Don't edit them. For ease of use, create Desktop shortcuts to the file BAB.EXE and also the Texture Compiler folder itself. The BAB program converts files in the format .BMP into a file with the format .MMP. The MMP files are what the Blade engine reads.

To edit existing Blade skins, you first need to extract the BMPs from the .MMP file. The BAB tool will not do this, but it can be used as a veiwer. Open the BAB by clicking the desktop shortcut. Two windows will appear. You don't need the Console window yet, so close it. The BAB text is in Spanish, but don't let that scare you. Click 'Archivo' (File). Then 'Abrir' (Open). Navigate to the folder where Blade is installed. The MMPs are either in 3DObjs or 3DChars folder. All the character skins are in 3DChars folder. Open the file Kgt.mmp. All the skins for the Knight model are in here. Click KGTNF in the Nombre (Name) column. The image should appear in the lower right field.

*Word of warning here. The blade tool software was made 'in house' by RAS and has some some lingering bugs. These are not a problem as long as you know where they are. There is one here. Don't use the wheel on the mouse to scroll down in BAB unless you have a picture showing. If you do, the BAB will crash.

Most of the RAS skin mapping follows this convention:

The characters have a front and rear bitmap. In the case of the Player characters...

There is a sort of system, but it's subject to a few variations, but it's not too difficult to figure it out.


Just to make things confusing the rest of the armour skins are not named like this. But ignore them for now.

All skin bitmaps have a coresponding Wounded skin. These are all named
the same as the unwounded version but with _W on the end. You have to have these even if the wounded and unwounded bitmaps are the same.


You can't save the bitmaps diectly from BAB. You have to grab them. Most graphics programs have a screen grab facility. I use PaintshopPro. However you do it, the bitmaps need to be exactly 256x256 pixels.
If you are replacing a RAS mmp file, you need to grab all the bitmaps in the MMP file. Save them to a new folder in the Textures Compiler folder with the <b>Exact</b>name of the MMP file you extracted them from (without the file extension). In this case - Kgt

Now the hard part.Use your fav graphics prog to alter the bitmaps. It's a good idea to save versions in seperate folders within the Kgt folder. The RAS bitmaps are quite small and it is tricky to work on them. And it can be mind=boggling trying to work out which part belongs there. I won't dwell on this as most people will be better at it than I am.
Only work on the unwounded skins. When you have got them to a point where you think they are finished, save copies of the unwounded with _W on the end to replace the original wounded bitmaps and add a few wounds.


When you have doodled about with the bitmaps and get to the point where you want to check how they look in the game, you have to recompile the bitmaps into format MMP.

Open The BAB again. This time you need the Console. To enter commands in the Console you have to do a sneaky trick to expose the input field. Hover the mouse cursor near the bottom of the Consloe window until it turns to a up-and-dowm arrows symbol. Click and drag upwards and you will peel back the bottom to expose a white area. You can type commands here. The grey field on top is purely for output messages. 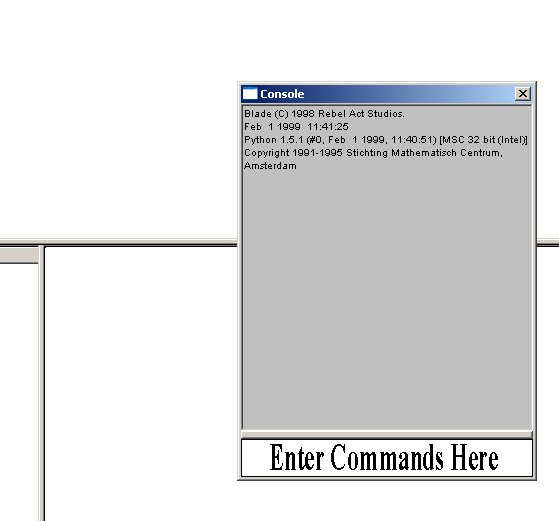 Masklin made a nice little tool to speed up the job of compiling.

Below is the code.

(Note I have altered it slightly. The original command 'process' I have replaced with 'go'. )This is purely because it's quicker to type and I'm very lazy and can't spell.[:I])

Copy this code and paste into a new file. Name it genmmp.py (exactly) and save it to the Texture Compiler folder.(select 'all files' option when saving). The only thing you may need to do is edit the BODHome variable to suit your own PC folder structure.

If all is well, the bitmaps will load into the top of the BAB window.
When they have all loaded, type:

Nothing will appear to happen, but a 1 will appear in the grey output field of the Console if it has worked. Look in the Textures Compiler/Kgt folder. There should be a Kgt.mmp file. (There will also be a .DAT file. Ignore it). To get the game to use this modified mmp file, you need to replace the original one in the 3DChars folder.
*** It's agood idea to save a backup copy of the original.

Once you have your modded mmp in the 3DChars folder, you can start the game and check out your changes.[:D]

btw. I should point out that there are various other tools that Blade fans have made to aid skinning. I don't mention them here as the I just wanted to outline the basic principles.
Top

is it to grom to ask someone to get the skin bmp files, I edit them then someone who is good in program language make the updating

I realy dont have brain for those u write above [:p]
Top

To avoid the difficulties caused by unfriendly interface of original textures compiler, check this software out:
http://sgi.bigtruck-canada.ca/
Top

I make this way

for thx here are some artwork [:D]

yeee I tried to make it like in credits, those illustrations are awesome for me
Jose Luis Vaello Bertol is a great artist in fantasy

I try to make more art from the game
Top

Ok its work Prospero [8D]
it isnt so difficult like I thougth at first [:I]

soon I will get some skins, peoples can use them in the main game or in modding, I will make good and evil charachters to

thx that u show me this way
Top

I make some skins, but there are some part of the face I cant figured out where is it on the bmp file

here a look what kind of manipulations I plan, of course I will make more bigger changes, this is just teh beginning

u can see on the minotaur that on face under the mask, its not perfect
here I show which part I mean

btw. the skins will get the original wounds, it will look better
Top

The bmps take a bit of figuring out. A lot of it is trial and error.


The Neverwinter Nights derived models are easier to skin. Each body part has a different bmp. Only problem is the head/body/pelvis are mapped symetrically, so one side is a mirror image of the other. I have got round this on some models by splitting the mesh and applying a different bmp to either side. Gets a bit complicated though..[:p]

btw. RAS models will not wear NWN meshes. They come out backwards.
Top

loved the dal gurak, it is kinda frightening[:)]
Top

there will be more Dals, and I work more on the skins, not just color and face changing, that would be not a big deal
I work on the armours, like here the new traitor knight skin