Discuss Drakan: Order of the Flame with fellow players and post any technical problems here where an 'unofficial' support team will try and help you. Gameplay help questions can go here too.

I messed with DOSBox a little during the holidays (SVN Daum build, it emulates Voodoo 1 graphics card), installed Windows 98 SE on it and Drakan. I think it pretty much worked as one would except on such hardware plus the slowness due to DOSBox being an emulator. One thing stood out though, there was much more blood.

So the obvious difference between running the game natively and in DOSBox is the slowness, so I capped the game to 20 FPS on the real PC (the FPS in DOSBox was approximately between 5 and 25) and voila, suddenly there was more blood. It does look like it was intended this way, when playing with normal frame rate, slaying the beasts would usually just leave a few drops of blood behind, but at low frame rate, there are large pools of blood left behind.

Stupid bug, never knew Drakan was meant to be that bloody.
"When a human being takes his life in depression, this is a natural death of spiritual causes. The modern barbarity of 'saving' the suicidal is based on a hair-raising misapprehension of the nature of existence." - Peter Wessel Zapffe
Top

I always thought there was a lot of blood when killing enemies but it disappeared after a while into smaller pools.
By fire and by blood I join with thee in the Order of the Flame!
Webmaster of Arokh's Lair
Top

There looks to be 2 kinds of blood, the kind that disappears (more like shrink away) and the kind that stays permanently. There is much more of the latter at lower frame rates.
"When a human being takes his life in depression, this is a natural death of spiritual causes. The modern barbarity of 'saving' the suicidal is based on a hair-raising misapprehension of the nature of existence." - Peter Wessel Zapffe
Top

http://imgur.com/a/FHc4o
"When a human being takes his life in depression, this is a natural death of spiritual causes. The modern barbarity of 'saving' the suicidal is based on a hair-raising misapprehension of the nature of existence." - Peter Wessel Zapffe
Top

Weird.
Strange things are afoot at the circle K.
Top

As far as I can tell, this is the result of certain things being tied to CPU speed.
A lot of old games have this problem, actually; most DOS games, Outcast, even little things like Star Wars: Droidworks. The better your computer, the less stable they become.

Using a CPU Grabber utility to forcefully make it run slower did in fact increase the amount of blood!

Here is the bloodshed when running at full non-CPU-grabbed speed: 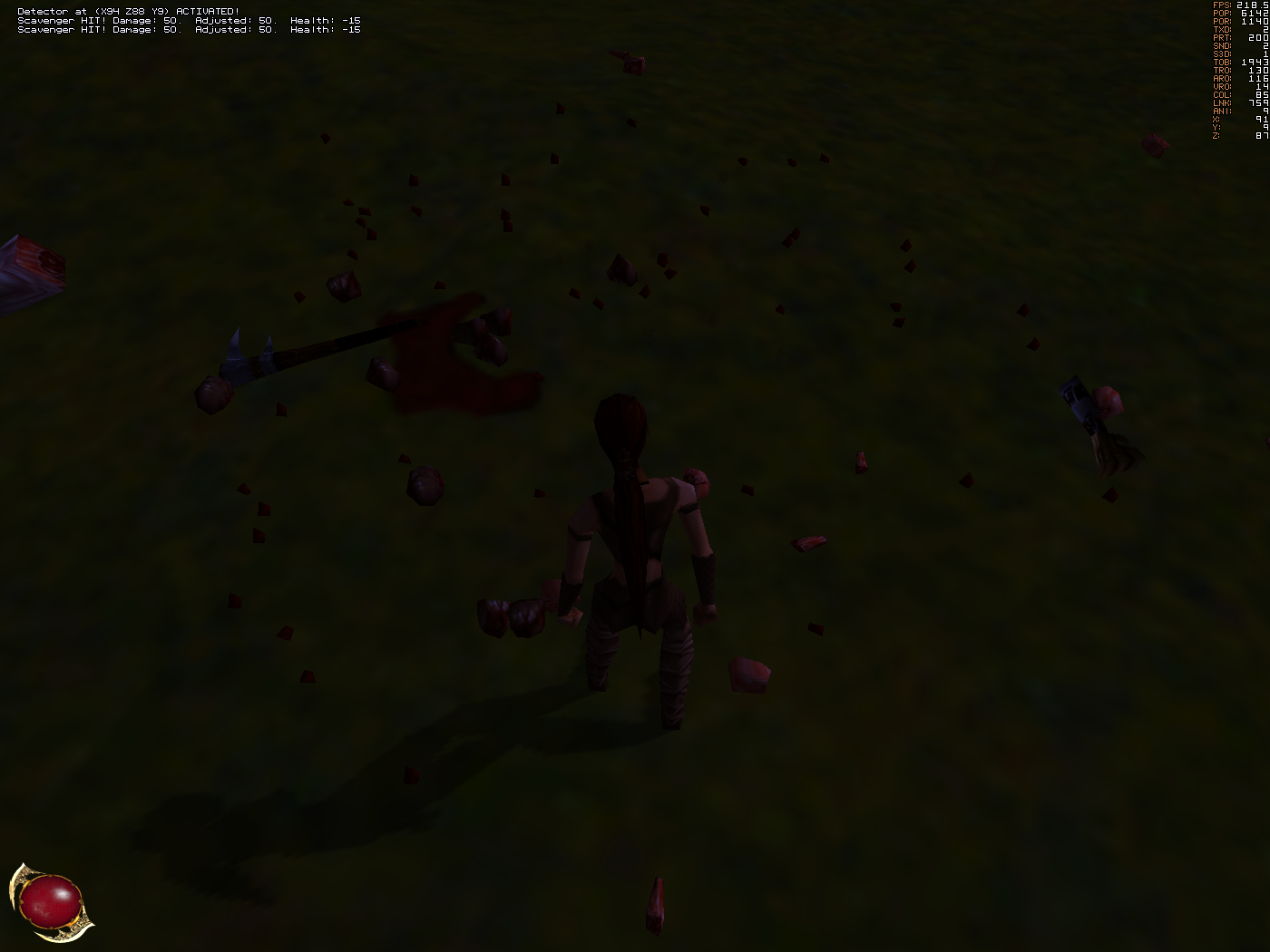 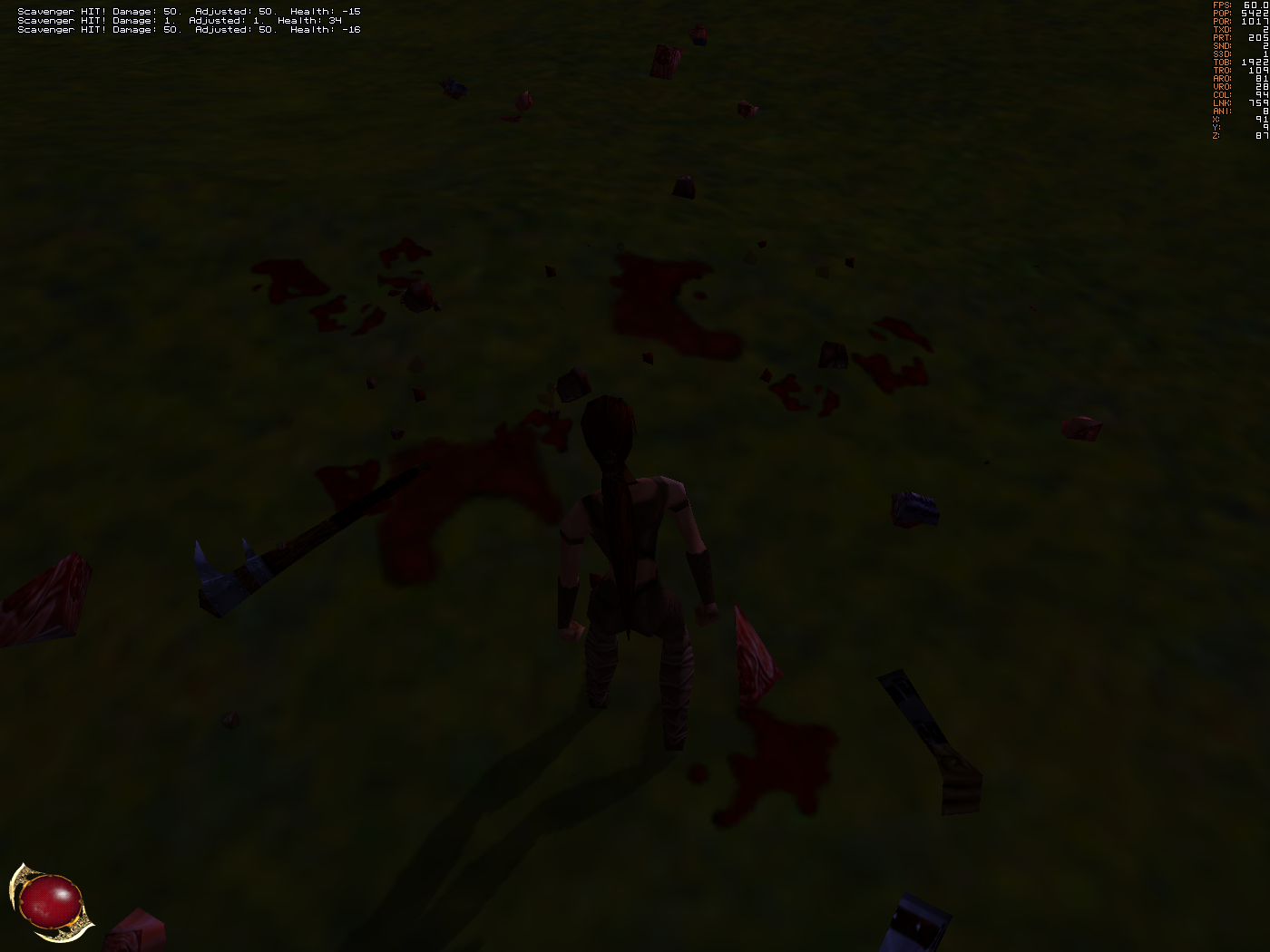 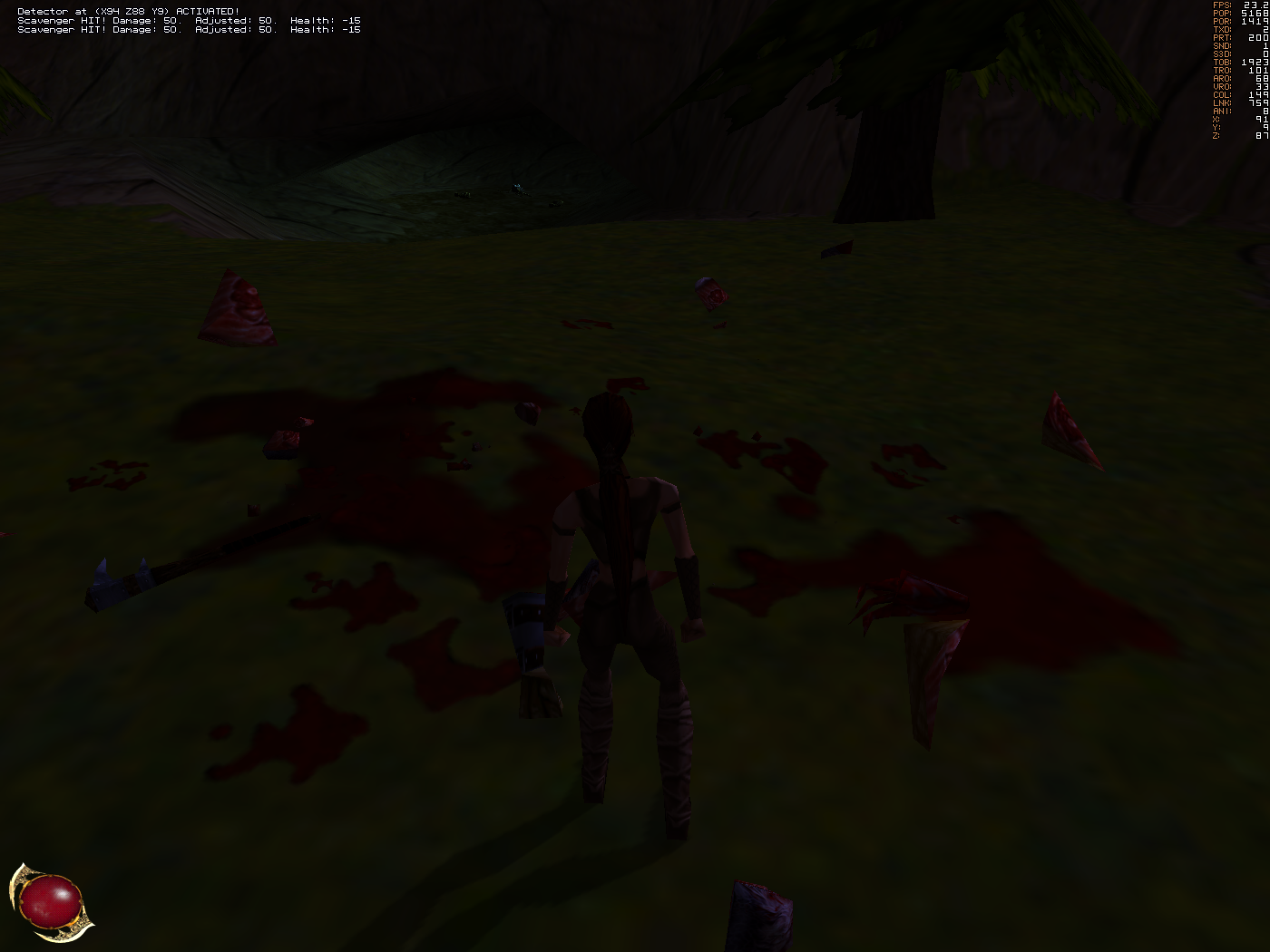 I also found that certain sword effects (such as the fire coming off of the flaming sword) don't appear properly unless you lower your CPU, but for the sake of not cluttering the thread up I won't post those screenshots.

The specific CPU Grabber I used can be found right here: https://www.mediafire.com/?mmdynyzzgjz
I used it by setting CPU Grabber and Drakan's affinities to only one and the same processor core in Task Manager, and then set CPU Grabber up to a setting of around 65-75, which seems to be the most consistently helpful and least choppy.
It sucks having to play at a lower framerate, but for now this is the only thing I found that works!
Top

CPU Grabber is quite ugly solution for slowing games down. It works by stressing CPU needlessly, so it runs hotter and wastes more power for nothing. We have these things called frame-rate limiters for such tasks. They usually work with everything that utilizes hardware acceleration for graphics. NVIDIA has one built-in their drivers, can be accessed using NVIDIA Profile Inspector. Maybe AMD has something similar, but if not, DxTory works universally. It's a screen recorder and you'd have to buy buy the license for full functionality, but, it can be used as the frame-rate limiter without restrictions, except that you have to wait 10 seconds after you launch it and it opens the license purchase site when you close it normally. When you launch it the first time, you must run the game so it creates its profile. Then, the function you're looking for is Limit Video FPS on the Advanced tab.

I don't think developers ever intended for players to run this game at 20 FPS. This is a 1999 title and the decent hardware of the time didn't have problem maintaining frame-rates at around 60 FPS (https://www.youtube.com/watch?v=Qcw4TT-48u0). Unless you disable VSYNC or your monitor runs at refresh rate higher than 60 Hz, the game will run at 60 FPS, and it mostly behaves correctly at this speed, blood is an odd exception. And before you say VSYNC introduces input lag, it can be cut down significantly by subtracting 1 or 2 from the monitor refresh rate and use that as the FPS limit. So you end up with just little worse mouse response than without VSYNC and no screen tearing.

Affinity is best left alone as it allows operating system to schedule everything most efficiently. Drakan actually has FPS limiter in its code, it's only used for dedicated server by default, my AiO Patch also activates it when the game window loses focus to lower CPU usage.

The bug with sword effects gradually disappearing at higher frame rates is also known. Old games being buggy when they run too fast is indeed a common phenomenon. I recently made a patch for Soulbringer for unrelated problem and it has funny glitches as well, either everything goes too fast or, at very specific speeds, it crashes. The developers of that game forgot to activate VSYNC in their DIrect3D 7 renderer, so by itself, it runs correctly only if user selects Direct3D 6 renderer. They did make sure to set refresh rate to 60 Hz, Drakan doesn't care about that, so it probably goes up to 144 FPS on fancier monitors with VSYNC.
"When a human being takes his life in depression, this is a natural death of spiritual causes. The modern barbarity of 'saving' the suicidal is based on a hair-raising misapprehension of the nature of existence." - Peter Wessel Zapffe
Top

There's no issue with blood if Rynn is killed in a brutal way, eg. being gibbed by explosive barrel. When game decides there should be bloodbath in such scenario, there is always a lot of it. Sometimes there is none at all, but FPS doesn't seem to have any influence in such case.
"When a human being takes his life in depression, this is a natural death of spiritual causes. The modern barbarity of 'saving' the suicidal is based on a hair-raising misapprehension of the nature of existence." - Peter Wessel Zapffe
Top

I think frame limitation is also ugly solution. Normal amount of everything tied into consolish 30 fps and cpu timers, not exactly MHz, but they are connected.
What you need to do to make it work right - patch game code with dynamic timer calculation based on current cpu timer and 30 fps and change value of in game event timers and counters. So lets say that at 30 fps you got 30 blood splashes in 1 minute, and in 60 fps you got 15 blood splashes in 1 minute, you have to fix final value by * or / by factor calculated from different between pattern and current values of FPS and cpu timers.

I remember there was similar fix for Sains Row 2, that used to run faster at CPU that has less than 3.2 or 3.6 Ghz it was made by Idol Ninja and I think it had source code you can look at.

Oh yeah another game uses Riot Engine - The Suffering (which is now available on GOG) suffering from similar issue - with more than 60 fps AI and scripts start to glitch, I think they even glitch at more than 30 fps but chance is more rare than glitching with higher than 60 fps.
Top

Agreed, I wouldn't recommend anyone to trade smoothness for extra gore. If only we knew what we're looking for exactly. Anyone here played Half-Life? There might be a patch out there, I remember seeing some project on GitHub whose goal is to provide bug fixed SDK, upon which game is based on. Anyway, the original game has a bug when you drop your FPS to 20, MP5 shoots faster, NPCs turn faster. Run it at 500 FPS and the poor NPCs have a hard time turning around. It seems the source code for that SW2 patch disappeared, maybe it can be gotten elsewhere. The easiest thing to do when messing with timing values is slowing or speeding up the gameplay.
"When a human being takes his life in depression, this is a natural death of spiritual causes. The modern barbarity of 'saving' the suicidal is based on a hair-raising misapprehension of the nature of existence." - Peter Wessel Zapffe
Top
Post Reply
10 posts • Page 1 of 1

Users browsing this forum: No registered users and 1 guest