I made a test with Tukaram riding a horse, it can be cool, but you are right, to animate him riding it´s ok, but if he have to fight over the horse will be crazy, I will need to redo all the combat animation and make new combos!! I don´t have time to do so much, but maybe I can make than at the beggining of some levels the characters can arrive in their horses, or that they can ride somewhere... I don´t know yet hahahaha 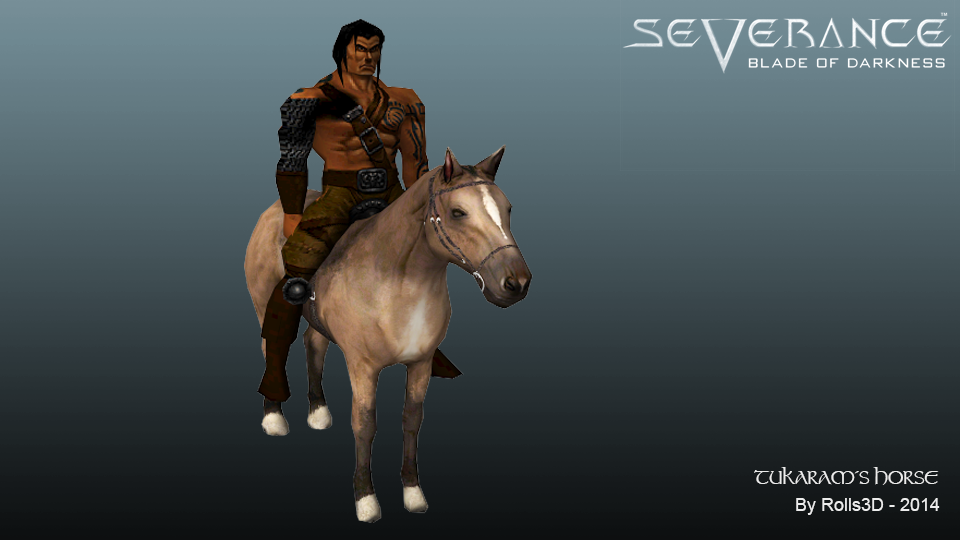 The horse was not made by me, was get and modify for other model that I find in google, maybe from other game, I just modify it to reduce the polys and modify the texture too, and change the size to be fit for Tukaram. Anyway, any kind of monster, animal or creature will be easy to do, the problem will be to make a correct rigging that works in BOD and that don´t give problems to the engine.

I tried the Wizard Mod, than let you play with a Wizard, but I find that when I start to play, I can´t control nothing, and the character appear there, moving the head, like waiting I push the keyboard to play, but nothing happend. I think the engine looks a little complicated.

I will download Orc city, I really want to see the salamanders!

One more question, to build the levels I need to use the LED, or there is the posibility to model it in 3D and later put it inside the game? I think to can do the scenarios in the 3D software will be more easy for me than to learn a new software.

About the Max, I will try to install it with the virtual machine, I will download it later

Thanks again!
Under the Mountain dark and tall
The King has come unto his hall!
Top

I had a go at getting Great Orks to ride Salamanders. The bow-legged stance of the relax animation of the ork fits nicely as a riding position. But it was very complicated to do and needs a lot of handling code. The rider is a dummy. He has not AI so he's just there for appearance. While he is mounted the sally does all the attacking. he will take damage though and will fall off if killed. The tricky bit is that if the sally is killed he needs to become active. So when you create a sally+ork mount an active ork is created and hidden. When the sally dies, the dummy is removed and the backup active ork is instantly placed in the same spot and same angle with the same life points as the dummy - and comes out fighting.

* If the Wizard mod doesn't work there may be an exception in the code somewhere. It's quite a complex mod so it could be anything. You really need to watch the console readout to identify the fault. I've been working on an OGL-friendly version and fixing a few bugs at the same time so I hope to update soon.
My BOD site: http://www.petrbnsfineart.com/bladestuf ... stuff.html
Top

You do need the LED to create maps. Although you can make models of large pieces of architecture and place them in the game as objects. LED is easy enough when you get used to it. You just have to get your head around the concept of creating spaces in a solid block, rather than starting with an empty space and putting sold things in. There is a definite skill to arranging sectors to maximise performance. Basically, the less portals the 'light' has to pass though the less work for the engine. You may notice that in the game there are walls that have no real architectural purpose other than to cut off certain views. Modern hardware copes a lot better than in the old days of win 98, but even now if you get a bad spot where the framerate drops though the floor.

The LED is quite a quirky piece of software and has a lot of odd habits. It was made as an in-house program so it's only as good as it needs to be. Never intended for commercial release. It doesn't have an 'undo' feature for instance. And sometimes you open it to find all the toolbars have vanished and you have to search for the .ini file and delete it - and then set the whole thing up again to your previous preference. With XP the .ini file was in the windows folder so easy to find. On win 7 it gets put in a folder that is normally invisible so you have to search for it.....
My BOD site: http://www.petrbnsfineart.com/bladestuf ... stuff.html
Top

Hi Pro!
Yeah, maybe I´m thinking too much when I talk about the riders, it´s a so cool idea, but by the moment is better I learn with more simple characters, like humans and dwarves at beginning. I will try to install the Max 2.5 with the virtual machines that Sryml adviced me, and when I have it installed I will try to replace the bones for others.

I will try with the console in the Wizard Mod to know what is the problem.

I saw some videos of a Severance Mod for Doom III, you know something about it? it is good? If I´m honest the idea is so cool, but in the videos I saw, seems it lost the lights and ambience of the original Severance, that in my opinion is one of the main things of the game that made you can feel totally the story and you can enter in this universe.

Now I have Windows 7. I will install LED and start to follow the few tutorials that exist, I think I already downloaded all.
I will made a test with it.
If I can insert new models in the game, will be cool to make a forest or something that we never saw before in the original game, but I´m afraid that something like that, with a lot of trees -so it means a lot of polys- will make the level so slow or even don´t let you play in it.

I tried to play the Mod Dwarf Wars too, and I can´t, it didn´t open, but it looks so amazing in the videos and photos.
Seems until now, the only mod I can play is one that change the skin of the character during the game, but the complex mods seems didn´t work.
I will still trying

Under the Mountain dark and tall
The King has come unto his hall!
Top

Pity the mods don't work for you. I may be able to help sort it out but need some de-bugging info. It's probably something silly.......

Dwarf Wars has some cool Doom Knights in it. They detonate after they are killed (Like Predator). DWII is essentially a Wizard test ground. You do need to Wiz map installed (and working). Ther are lots of supernatural-type new monsters in it.

Foliage is a subject often discussed in the past. A lot of games use a simple, basically one-poly sheet with a branch full of leaves on it. Branches tend to grow fairly flat in a lot of trees.
The gaps between the leaves are made transparent. By having a few variations and arranging them differently you can make very complex foliage with no great strain on the engine. Unfortunately, BOD does not have quite the same capabilities. It can be done up to a point, but the leaves look a bit odd. I have one in a map. I'll post a picture when I get a moment.
My BOD site: http://www.petrbnsfineart.com/bladestuf ... stuff.html
Top

Ok, so interesting. I really want to see the trees with the leaves.

As I said in my other post, I will copy the bug that don´t let me play to some of the Mods, and I will start to learn LED to see if I can do something interesting with it

I will start with a little map, I was used to create maps for games like Doom, Hexen or Blood in the past, but seems LED is really more complicated. I will upload my progress in other posts when I start to create

Under the Mountain dark and tall
The King has come unto his hall!
Top

I posted this pic yesterday, but post seems to have gone.

The tree here looks OK in this low-light night scene. Looks silly in the daylight. It can't be used anywhere with external light as it won't cast shadows correctly.
My BOD site: http://www.petrbnsfineart.com/bladestuf ... stuff.html
Top

btw. Thordreck. have you got the Allies mod installed? It's a mod that Masklin did ages ago which allows you to use ally npcs. Most of my mods use the modules and won't work without it.

My god, it looks really amazing.
The dog company you helping you to kill the enemies?
The model and textures are amazing. Which mod is this one? I really want to try it.

About the tree, if I model all the leaves of the tree like a total poly will look strange? I will make some tests, maybe with the right texture can look good, but I´m afraid like always that I introduce too much polys in the game and it don´t work.

I didn´t had the Mod Allies, maybe that´s why it didn´t work before. I already download it. I will try it this afternoon when I arrive home

I will tell you tomorrow
Under the Mountain dark and tall
The King has come unto his hall!
Top

The leaves are just a texture on a flat, one poly sheet. I just drew some thin branches and added leaves. The trick is to draw on a totally black background. There is some code in BOD that can make black parts on an object invisible. Ideally it should leave the coloured parts opaque but it makes them slightly transparent. Not brilliant, but OK up to a point. I've tried tree models off the web with each leaf made of polys, but far too demanding on the game engine.

The map is something I've been playing about with. Not finished yet. The dog is quite entertaining. He can assigned to the Player and responds to a few commands - much like a real dog. You can call him and set him to attack enemies. He doesn't always obey. Again, much like a real dog.