HD texture (weapons/maps) will be included? if Can you add it from others mods?
Top

HD texture (weapons/maps) will be included? if Can you add it from others mods?

Greetings.
1.52 not released. This version not works well and is obsolete.
The V1.6 is 85% finished, and the errors of save-load are all fixed.

My computer is old, my mod goes very slow with high resolution and too much enemies. I will try to do the "HD_MBKmmp" pack of textures, when I get to finish the V1.6...

Thanks.
Loose your ghosts, because they chain suspiciously your freedom.
My Youtube channel, tests with Hyperborean Mod:
https://www.youtube.com/user/MBEASTKING1980
Web site of Hyperborean mod:
https://sites.google.com/view/bodhyperboreanmodbymbk
Top

Thanks for not forgetting game)
Top

i just installed your hyperborean mod and fixed the marakamda level as posted before.
The save - load bug does not kick in anymore.

So i went through the level and got a ctd bug when i try to enter the temple. I can unlock the temple-door, but when i try to go through it the game freezes. I can see the windows cursor and via crtl+alt+del im able to get to windows. There is a bug message from windows, that there was a bug and blade.exe had to be stopped. After that the gamma for windows is to bright, but this ca be fixed with a start-close form the game.

I have tried to use the console, to get a bug-message. But in the log is nothing to find. I don't know if the console updates with players progress?

Could it be, that at this point, the cutscene with the demon has to kick in? I'm not sure if this bug is game related, or has something to do with the graphics card.

Do you have an idea how this problem can be fixed? Shall i do the other fixes of the python files as well?

Aside from that, i just find your mod at this stage very interesting. The different damages, the creature moves and abilitys and finaly, a good reason to use the bow!
Top

problem is solved. In the errors section the bug has been described as "bone fire/many fires in view in rOpengl renderer crash".
There is also the solution to the problem, wich works. You guys are great!
Top

After defeating the demon, you'll have to read the nercomancers book. The screen slowly gets dark, a loading screen appears, and ctd.
I tried to use the console mode and i can see that the shown code runs forward to endAPP. The means the program, as the console itself, ends. And the Code in the console is also gone. Ive tried to work around with fraps, to take a screenshot, but this doesn't work.
Is the code from the console somewhere logged?
Top

So, after puzzeling around with different programms i got the following shot of the logfile. 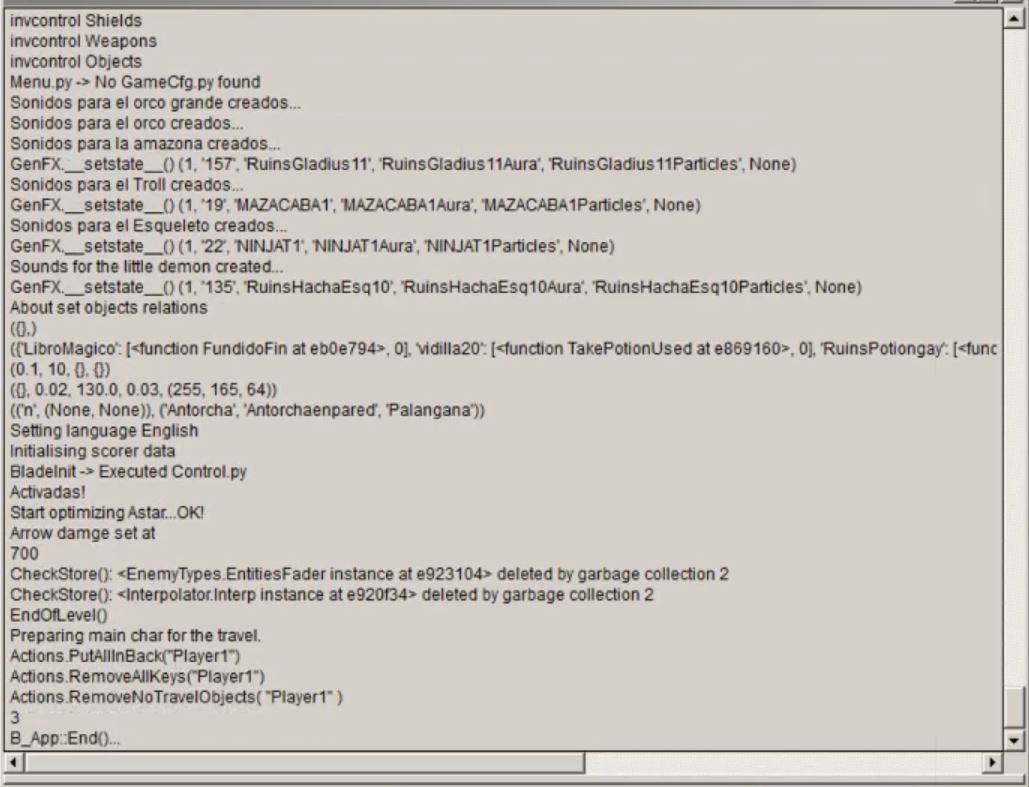 Through the simple fact that i'am not familar with python, i can not see an error in the logfile. But everything gets visibile with a comparison.
Means, i must get a logfile of a correct level transition of the marakamda level.
Top

And here is the shot from the level transition from the original game. 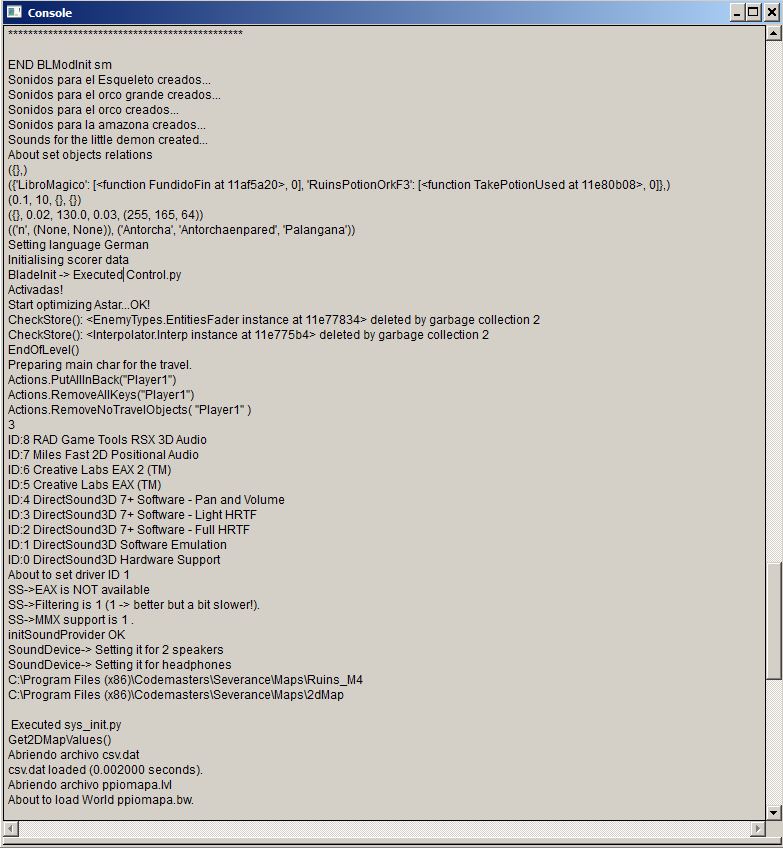 After the "EndofLevel()" everything works like in the modded game, till the "3" appears. The difference i can see is, that in this logfile some technical stuff appears. After that "2dMap" gots loaded, it worked fine by the way.
In the logfile of the modded game, there appears a "B_App::End()...". Question is, why?
Is this a legitimate command to shut down the game? Or does it mean that some file is corrupted and the game gots shut down?
How is the level transition coded? Is there a seperate file for this?
Top

I have a question to anyone, who is using this mod.
Does the speaker appear at the level beginnings?
I can't hear him when using the mod, the subtitels are also not shown.

The explanation for this could be, that i am using the german version of the game.
I don't know if the developers have given different names to the audiofiles.
Top

Hello xxHyFoxx, and many thanks.

I see the bugs, and all are corrected well in spanish version of the V1.6.
But in the English version, some folders and files have different names... and there are more mistakes. These will be also corrected.

thanks for the answer. The bugs (wherever the came from) aside, your mod for the maingame is incredible.
I played a lot of maps with the amazon to the end and the fighting is a real challange. Many enemys get shot with the the bow and for the amazon character this is absolutly fine.

xxHyFoxx wrote: ↑
Fri Jul 06, 2018 6:47 pm
But there was one enemy i could not beat so far. This was the Vampire in the Island of Karum. He heals to fast. I tried Crown, Power Potions, freezing and poisioning. With all double combos i can beat him down to 1/3 of its initial health. After that i have to start the combos again and he is fully healed. I think here is some work to do.

Hello friend and thank you very much

Yes, the vampire is very difficult. The Amazon is the most difficult character to use, because she is the weakest, but I love the bow from medium distances. Other heroes can kill the vampire much more easily, for example the Barbarian can win with several strong blows. You know, to defeat the vampire, you must kill him as soon as possible, paralyze it with the freeze ball, use the Power Potion for greatest strength, and use the Crown for immunity to drainage, and you will need a high level. The problem is the vampire weapon, heals by auras...

Well, I have corrected all the statistics of the heroes and the enemies, to balance them. To defeat normal enemies, skill in combat will be needed; to fight against groups, strategy and power will be needed; to beat the powerful bosses, you will need the special items and the bonuses to the statistics.
The truth is that it also takes me a lot of effort to pass the advanced maps. I prefer to play with the barbarian or the dwarf, because they are stronger at the beginning. The knight and the amazon are weak at first, but then the knight is very fast in close combat, and the amazon is very skilled in all distances.
Loose your ghosts, because they chain suspiciously your freedom.
My Youtube channel, tests with Hyperborean Mod:
https://www.youtube.com/user/MBEASTKING1980
Web site of Hyperborean mod:
https://sites.google.com/view/bodhyperboreanmodbymbk
Top

i freezed the vampire as you said, but i didn't make enough damage. A higher level yould be an alternative, but since i can't play the campaign im stuck to the cheat-entrys to the level and the startlevel. So i'm bounded to the things i find throughout the level.

The most time im sniping with the bow. Groups of enemys ca quickly kill the amazon, so i try to avoid them and only going meele when the most of them are down. Also good at sniping are the orks. Knights are aiming usually to high, like the skelletons.
The single enemys are usually attacked from behind. Let him start a long combo, roll into his back and than start the own combos. I love to cut orks into pieces with the katars. It makes mor fun as with the spears.

What seems a little bit overpowered are the vampire arrows. With these things, and the right enemys, my health is often between 60-100% and no potions are used. When you only have normal arrows it is much more difficult to go through the level.

At Tell Halaf i got a problem with the chaos knight. With his 30.000 life points he is a tough guy and he makes mostly instant-killings on the amazon. So i doged around a little bit and supringsly he teleported himself out of the throne room. He then trys to come back in frome the outside.
I cought him again in the stair-room, where he was walking against a wall. So i started shooting at him an nailed him down to 13.000 life points. As he could not see me this was effective.
Then he started wandering around, after some time he got me and than he teleported himself again. This didn't worked well. Suprisingly his life was only 1 point as he reappeared, but he was invincible. His sword dissappeared constantly, but i could still see the auras of them and he is still making damage with it.
I tried a lot of things, teleporting, casting engery ball and so on, but he stayed invincible.
Top

xxHyFoxx wrote: ↑
Sun Jul 15, 2018 8:29 am
So i have an update to the level switching problem.
The problem is caused by the "select-level" cheat. If it is deactivated, the things work absolutely fine.
If it is activated you get what i have mentioned before.

About the cheat "select level and map", in the Readme.txt file I wrote all the mistakes known.
The game will not works well, when loads a map with this cheat. Due to that, I make that the game restart or go out to windows. If you want to travel to another map, this cheat must not activated. But, due to the bugs in the code, load and save the game not works well, so you already know that play all the history is not possible... Well, but now all maps load-save well in the Version 1.6.