Discuss anything related to computer games and fantasy in general. Other fantasy games, games with dragons in, fantasy artwork etc are welcome here too. Posts are auto pruned after 3 months if not viewed. Please post Drakan related topics to the relevant forums below.

Anyone own Skyrim? There has been a few mods for this game that lets you control dragons and now I found a mod on youtube that clearly shows one working. You can attack and use your breath weapons just like in Drakan (and how it should have been in Divinity2) so anyone who has played both should be interested.

I'm going to give it a try when I get further into Skyrim as I have bought it when it was discounted but have other games to play first.

Here's the video and download link for those that own the PC version of the game
http://www.youtube.com/watch?v=lOa4if2Z_ok

http://skyrim.nexusmods.com/mods/31697
By fire and by blood I join with thee in the Order of the Flame!
Webmaster of Arokh's Lair
Top

Y'know, I have played mostly just Skyrim since it was released. That's a lot of Skyrim.
This mod would be SUPER cool, but because I play on a 360, I'd need someone with the PC version near me that I could share files with. When that eventually happens, I'm gonna go mod-wild with it! There are dozens of really fun looking mods out there... just teasing me while I can't touch 'em!
"Great Gulgren's Sack!"
Top

Just an update to this thread - the dragon control does work but it's a bit limited. You can't fly around the whole map and burn everything in sight; instead you simply cycle through targets and order your dragon to attack. I was getting a lot of graphical pop-ups as well.

Here's a screenshot of my main character, Teekus the Argonian named after a character in Oblivion. He's currently level 36 and rips people's heads off with his bare hands. I think some of those 'finishing execution moves' in skyrim are brutally cool. 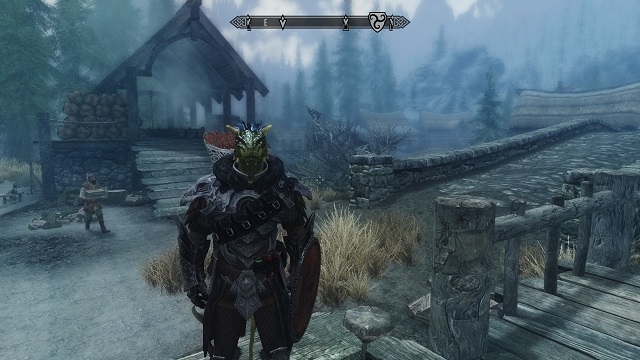 Now, with Skyrim having such a large modding community wouldn't it be great to use this engine for a Drakan re-make? I know it will never happen but just think how good it will be with the wonderful graphics of Skyrim.
By fire and by blood I join with thee in the Order of the Flame!
Webmaster of Arokh's Lair
Top
Post Reply
3 posts • Page 1 of 1