The Searing Mountain - Fantasy game in Unity Engine by YanGez

Discuss anything related to computer games and fantasy in general. Other fantasy games, games with dragons in, fantasy artwork etc are welcome here too. Posts are auto pruned after 3 months if not viewed. Please post Drakan related topics to the relevant forums below.

The Searing Mountain - Fantasy game in Unity Engine by YanGez

As you might know. I spend recently a lot of time for making new game in Unity Engine called The Searing Mountain. In that game I want to use most of my programming skills and experience in making mods, maps to Drakan or just writing softwares.

Quick plot. It is about female warrior that have to fight against the forces of evil. She has to explore world in search for important artifacts. That artifacts will be important to defeat main commander of evil forces. These artifacts are located all over the world in many different places. So in that way she'll encounter multiple enemies, creatures and she can pick up many of different weapons, the same for spells. She will get experience points while fighting enemies.

I had an idea when I was testing new features in Unity engine in my sandbox test scene where I implement all features. In that sandbox map I created player controller, camera movement, camera collision, inventory system, shop system, spell, bow, locomotion of player and many other features. There was released tech demo already that I shared with other members, but for now I prepare for releasing demo with significant changes including adding multiple new possibilities and features. I get most of help from Duncan former developer of Drakan, Rodhenik, Jage and used most of free assets from placeholder, OpenGameArt or Unity Asset Store. And of course Teekus(Arokh’s Twin) who edited script, if he don’t mind Ill ask him for help in making books.

I made list of features that will be implemented that I didn't make so far : lever , invisible potion, fire crystal, ice crystal, lightning crystal , artifcats, book system, map of adventures, different type of arrows

Of course, I register game on IndieDB website for get some interest of players
https://www.indiedb.com/games/the-searing-mountain
Take also look at my portfolio:
https://yangez93.wordpress.com/

I spend most of my free time in programming or just making simple scenes. I would definitely need help of 3D artists as in that way I would concentrate on making game mechanics, new features or optimize scripts.

Game is of course inspired by other RPGs and as you might see it is mix of these games, you can see Diablo like click and move system or health and mana orbs, the same for similarities for Drakan (female warrior or rocky mountains similar to Wartok Canyons), I also get inspired by The Elder Scrolls, Risen or Gothic.

Of course I don't want SPAM with screenshots, Ill put one, if someone is interested for more, visit webpages that I linked above 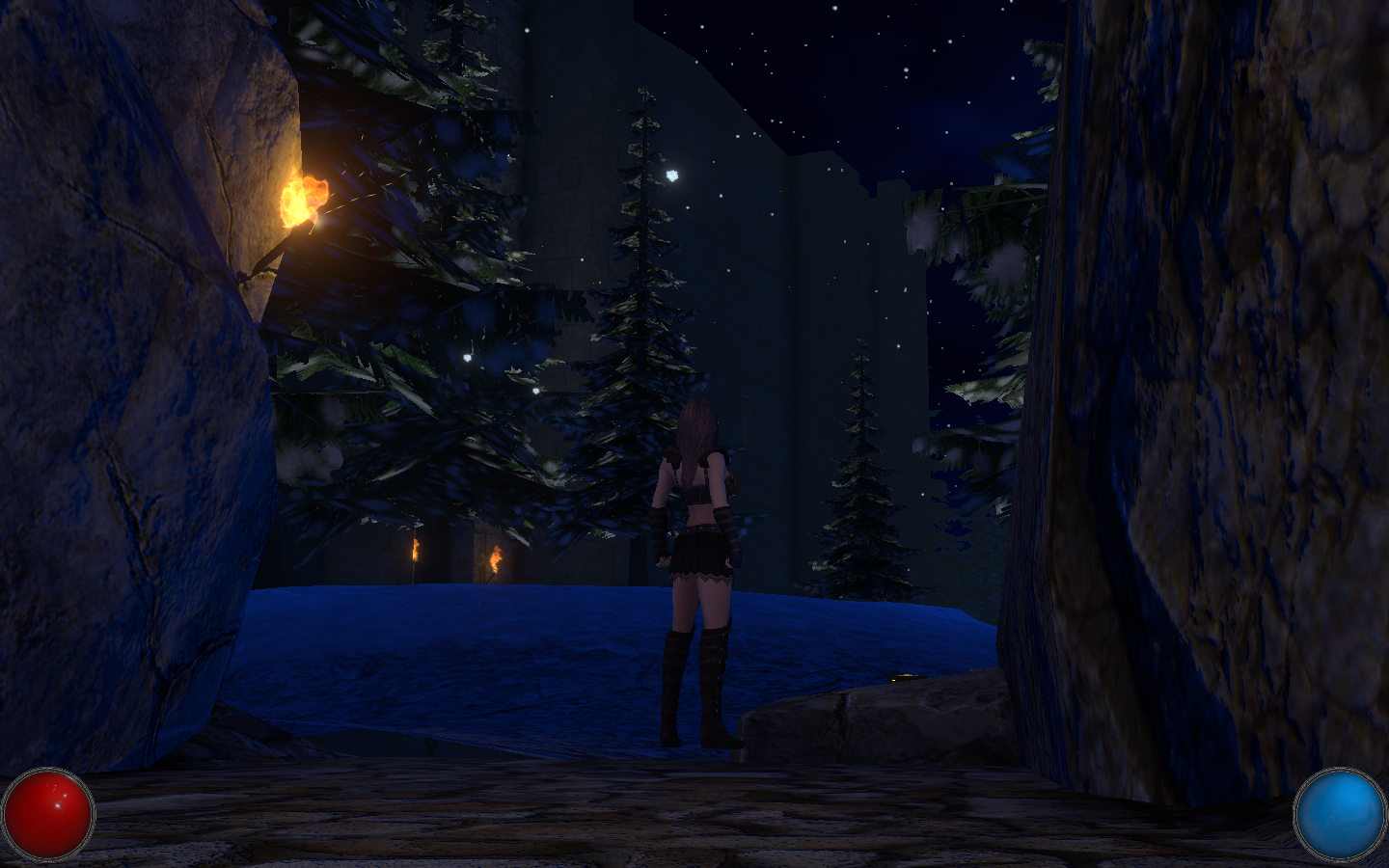 I playtested several builds of this game, it's inspired by Drakan amongst other 3rd person action adventures and it's definitely worth checking out.
By fire and by blood I join with thee in the Order of the Flame!
Webmaster of Arokh's Lair
Top

Thank you Adrian for testing

Yeah, it is also inspired Drakan as this game is about medieval female warrior with world of fantasy. Of course as I mentioned above, there are couple features inspired by other games. Of course I have multiple ideas for new levels, concepts or new game possibilities final build will be much more different than tech and playable demos. Unity Engine is good for making 3D games, I decided to make it in that engine, especially when I have experience with it, in comparing to making maps for Drakan here I can write some scripts. Meanwhile, I write story and GDD, it really helps in development as I know what to do when I run Unity project. Project development also speeded up thanks to using external 3D assets as I don't have to spend many of hours in creating 3D models, list of all used assets Ill write in description and in-game credits

One of ideas as some of members mentioned, is about dragon. Probably I won't make dragon system for couple of next builds, as there are other important features to be made including working save-load game, level transition or working settings. First thoughts were about evil dragon, for example character has to defeat dragon using spells or bow while the dragon attacks the player with fire when he is interacting with player(when he is in certain distance to player as other NPCs behaviors are)

Recent important feature is of course shop system, I managed to make simple shop with villager, player decides which item he would buy from gold that he could grab during exploring world, I made bag of gold item, I could change value of amount of gold how much gold player could get after picking it up. The same for cost of specific items, shop system gets information of player inventory about gold count, it changes value after buying items. Probably Ill leave for now infinite amount of items that seller has. When shop system is ready, I also think about making magician shop where player could buy new spells or mana potions
Top

As some of you maybe know. The next version of The Searing Mountain is released. Most of the changes include the 3rd person controller where my decision was as the level designs were more fit to this controller instead of point and click. The point and click controller before introduced important features including AI, NavMesh and raycast system that is now more advanced in the game, so mostly the character controller changed. The NavMesh agent for the protagonist works but only for cutscenes, so that component still has some role.

Developing the game is somehow my personal goal also for learning new things about gamedev and programming.Important feature that I'm proud of is of course save and load game that required a lot of work with programming serialized data, data structures, input files, extension and binary formatter. And all of that working without errors. The beta testers helped me a lot. Game Design Document now has around 92 pages, that includes notes and already written story and game concepts.

There are two other TSM related smaller projects that will be Android Text Game and Text Game for Windows. Android will be written in Kotlin and working for mobile devices, nothing extraordinary, simple text game that player has to take action with clicking buttons and Java text game. The same as for Android but for Windows. I'm pretty sure that these projects won’t get much interest, but it’ll be important in order to extend story and the world of TSM for larger project which is TSM for Unity Engine

The next planned features for TSM in Unity Engine that must be made are : swim and climb system, armors and skill points for the players as they are essential to the RPG game which it is. And of course Quest system that gets information of the actual level with all tasks, side quests and next adds to the player GUI.

The next stable version will be released after 6-9 months. The work will include a large part on mentioned planned features but also on optimizing, improving existing stuff. The actual made levels are made in a very easy way, for now there aren’t much more advanced terrain shapes as I plan to use Digger Unity assets in the future, the first I want to concentrate on the most important game features and mechanics.

The other goal to achieve is also an improved AI system, with more advanced behaviors for example line of sight or pathfinding that will require some knowledge on neural networks.

I’d like also announce that I'm looking for volunteers, foremost I’d like to invite to the project C# developer who can help me implementing and maintaining game features and a writer who can write a story about TSM.

Check the playable version where download link is on IndieDB. If you have some remarks, please write to me

https://www.indiedb.com/games/the-seari ... 7-20210301
Also I’d like to share with you my recorded video footage with gameplay and walkthrough
https://youtu.be/PRz1ie0h6d4 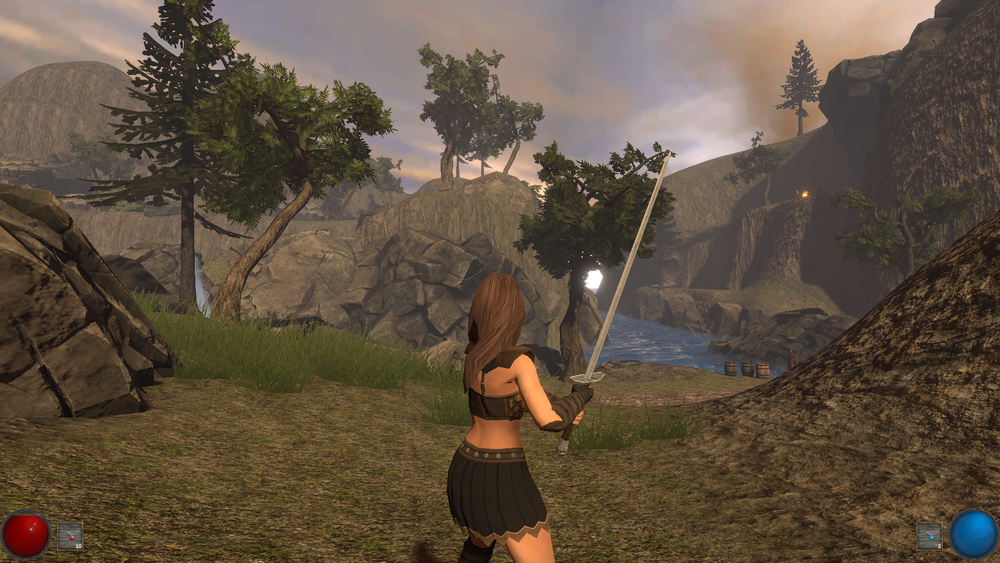 I’d like to let you know that the project is going very well. Work includes mostly fixes and optimisations for game mechanics, do more realism,swim and climb controllers.
Work also includes mostly editing already existing levels and doing more level designs on them, adding new levels isn't a good idea to that stage of the project where there are still bugs and mistakes to be fixed.

The next version will be released 1st of June 2021. It’ll be version 0.8. I’ve updated the project to Unity version 2020.3.0f1 LTS, Unity Hub is very helpful for managing Unity Editor versions, so I decided to do so. In the next version there will be extended inventory and panels where the player will know what quest he actually has to accomplish.

The bow system will be fixed in larger parts, especially with different types of arrows, there will be explosive, magic or snow arrows that weren’t in the previous version.

Better animation rigging, the same as the current character controller where I use 2 dimensional blend tree for animation rigging, it means now the player can strafe, go backwards, left and right. And above all crosshair, so the aiming will be much easier, you can shoot using bow and cast spells without changing to an FPS controller.

Save and load system will be fixed with extended player data, now it’ll save euler angles of current player rotation, what quests he accomplished and data about movable objects with triggers.

When the next version will be released, the next goals for sure will be the skill system (and maybe even award system). It’ll encourage players to play and spend more time getting his character better and skilled.
Top

I decided to release Game Launcher. This launcher is essential to assure that the player will have the most recent version, it doesn’t require checking the recent news but if the player clicks the game launcher it starts automatically checking if the next version appeared. Really useful stuff, I’ve updated the link above, feel free to test that feature, I need some feedback

The link will redirect to The Searing Mountain IndieDB page, they have nice stats analytics so I can check how many players downloaded the launcher

As for future changes, there will be more advanced structure for inventory items, for now I’ll leave the older inventory system, but the next system will include more stable information about item amount and new information about upgrades, durability and information about enchanting of items. There also will be some slight changes for controller, on slope behavior and fixes for climb system

The graphics are very similar to the old Witcher.
Top
Post Reply
7 posts • Page 1 of 1